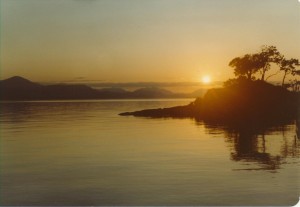 The sun was setting, as our sailboat glided silently over the calm waters of the Columbia Bar – a stretch of treacherous water that can challenge the most rugged sailor when the tides drastically change the waters trajectory.

We were on our way home after several glorious weeks of cruising in the San Juan Islands. It took almost an hour and a half to reach Astoria.

After quickly scanning our charts, we decided we could reach a tiny cove located in the upper part of the Columbia River. Cruising at 7 knots, we continued to make our way through the expanded mouth of the river where water spread out over a wide expanse of water giving the illusion of a huge sea of navigational water. Only those who had studied their charts knew that going outside the clearly marked channels could quickly end up running aground in the surrounding shallow water.

A slight chop began to develop from a rising evening wind as we rounded a corner and made our way into the more clearly defined river. Although it appeared to have plenty of water to navigate, the truth was there was a fairly narrow channel that was kept dredged to 40-50′ in order for ocean going cargo ships to travel to and from the ocean and Portland, Oregon.

Dusk was falling more rapidly than we had anticipated as we entered the river. But we knew we were almost to the obscure entrance leading into the tiny but safe cove.

Suddenly out of the deepening darkness, an enormous hulk was bearing down on us. As we quickly turned the wheel, taking us to the shore and out of danger, the huge container ship silently slipped past us on its way to the ocean. Because, it had emptied its cargo in Portland, the ship rose high in the water where the lights on deck were almost invisible to us.

Had we not been on alert and knew where we were in the water, we could easily have been hit. With hearts thumping, the remaining waning light revealed the tiny entrance to the channel that would take us into a quiet, safe anchorage for the night.

While this makes a nice compelling story, what has it to do with the everyday lives we lead? Perhaps the most important lesson is being prepared.

We had spent weeks taking boating courses on navigation from the U.S. Coast Guard Auxiliary who offers boaters education on safe boating. We knew how to read a chart, chart a course, read the “road signs” – the buoys, lights, bells, beacons and range lights – that indicate a safe route through the water. Without such training, boaters can quickly find themselves at the mercy of unexpected sand bars, submerged rocks, swift running tides or even ships bearing down on them.

Preparing for life may not be as orderly as taking some navigation courses. But there is so much we can learn to prepare us for our journey through life.

When we explore such questions as, what do we want to do, where do we want to go, what preparation is required to get there and how will we prepare for adversities, we can then chart a course with confidence, ready to meet any obstacles and dangers that might rise up out of the twilight.