Listen to this episode of the Focus With Marlene Podcast

Click here to get caught up on all episodes in this series on recovering from loss.

“Successful people are simply those with successful habits.”

To be successful, you need to be in charge of both your time and habits. Chores need to be done but we also need fun and relaxation.

In my recent post, Are Your Habits Sabotaging Your Efforts? you kept a record of how you spent your time each day for a week.

This week’s post will help you understand how habits are created and reinforced.

Why do we do the things we do

Before habits can be replaced, we need to understand what keeps them in place. Everything we do, we do because we get a payoff or reward of some kind. That payoff can be in the immediate moment or in the future.

We get immediate pleasure in eating that piece of cake. We rationalize our behaviors by telling ourselves we will only do it this once. Unfortunately, rationalizing can become a habit that keeps other unwanted habits in place.

Here is an example to better illustrate what I mean.

A mother gives a child who is acting out in the store some candy so he will be quiet. The child has just been “positively rewarded” for yelling and screaming.

But the mother has also been rewarded. She was “negatively rewarded” because something she didn’t want was removed: the yelling and screaming stopped.

For behaviors to become habits, they need to be reinforced (positively or negatively), repeatedly and consistently over a period of time.

In the above example, the child soon learns that he will get what he wants by acting out and the mom learns that when she acquiesces, she doesn’t have to listen to his yelling and screaming. Once behaviors are in place, they only need to be reinforced intermittently to remain in place. Understanding this process, the mom can choose a better way to handle acting out to achieve compliance.

Your child cleans his room and each time he is rewarded with a hug, positive comments and extra computer time, which he highly prizes. Gradually, as cleaning his room becomes fairly consistent, only occasional rewards are needed such as, “good job” comments or extra playtime once in a while.

The behavior has become a habit. Or a child might eventually clean his room because he doesn’t want to get yelled at anymore. In that case he is negatively rewarded (no more yelling from Mom).

As you evaluate your habits and what keeps them in place, it is important to identify the rewards you receive, both short-term and long-term. In establishing new habits, you may notice both something positive received and something negative removed.

For example, developing time management skills will give you control over your time (something positive received) while removing anxiety over not completing tasks (something negative removed).

“We are what we repeatedly do. Excellence, then, is not an act but a habit.”

—Will Durant, based on Aristotle’s teachings

Here is a quick summary of how behaviors are reinforced and become habits. Remember that all behaviors can become habits if they are repeatedly and consistently rewarded.

Example:  child cleans room, gets hug and extra TV time – behavior is reinforced and will continue or increase.

Example:  Child whines at store for candy. Mom gives in, child is positively reinforced (gets candy); Mom is negatively rewarded because child stops whining. Child learns that whining eventually pays off if Mom at some point gives in. Mom chooses a quick solution to get peace, but with long term negative consequences.

Reinforcement is done once in a while to maintain a habit rather than consistent and immediate that is needed to put a habit in place.

Take charge of your time and your habits

Research on how our brain works gives us new insights into why we do the things we do and continue to do them even when they are not beneficial. 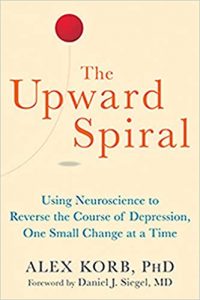 According to Dr. Alex Korb, author of The Upward Spiral: Using Neuroscience to Reverse the Course of Depression,One Small Change at a Time, it takes both decision and action to change a downward spiral to an upward one.

Habits that keep us from accomplishing our goals become a downward spiral.

To change that downward spiral of negative habits and routines, requires first recognition and then making a conscious decision followed by action. Taking that tiny step in a new direction begins the process of habit change. When you do, you are changing the dynamics of the neurons and neurotransmitters in your brain.

Remember the story of Arnold Beisser? Finding himself in an iron lung and unable to move, he decided to take charge of his life.

He recognized his position, made a decision to alter that and took his first few steps by engaging in things within his room. As he continued his quest to find a purpose for his life again, he not only left his iron lung, but became a psychiatrist, an administrator and author. He did this by first making a conscious decision followed by tiny steps in a new direction.

Habits are resistant to change.

Replacing them takes time, commitment and dedication. A lifestyle becomes a habit. When we are no longer satisfied with how we live, it’s time to question what we are doing. We not only need to know what isn’t working, we need to know why and what new habits can replace them.

So, my challenge to you is to pick a behavior or habit you want to replace and start the process. Putting a new habit in place takes hard work and courage and we’ll often rationalize why it is just too difficult to change.

Put yourself in the driver’s seat. Setting up and following a daily routine does not have to be so rigid that you can’t enjoy life. But it is there where we begin to take charge of our life. 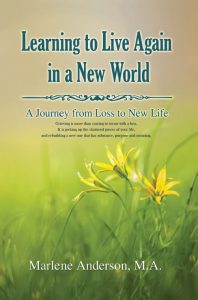 Learning to Live Again in a New World

We need validation for the turmoil of thoughts and emotions we experience. But we also need the tools necessary to create a new beginning that is both satisfying and meaningful. My new book, Learning to Live Again in a New World, offers those tools to help work through the problems you might be facing.

It is a guide to help you through the ups and downs of grieving a significant loss. And it includes a study guide at the end for use with groups.