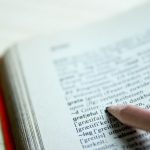 Strands of wispy grey hair surrounded her face as she sat at the kitchen table, laboriously translating her familiar German into written English. A word primer and scraps of paper were scattered over the kitchen table, as with pencil in hand she devoted herself to writing. It was nine o’clock at night; she was tired after a long day’s work on the farm where we lived, but she was committed to practicing her writing before going to bed.

I was next-to-the-last of ten children born into a German American family. Early in those family years, German was spoken as our main language. By the time I was born, it had been replaced by English. But although conversation was now in English, my mother still read, wrote, and sang in German. She had a beautiful voice that evoked a resonance from her past.