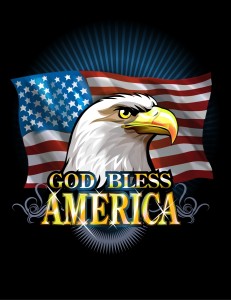 “What would happen if America abandoned the principles of faith and liberty? What if all religious freedom was outlawed and the Bible a forbidden book? What if the U.S. Constitution was lost to a forgotten history? Who would rise up and be the voice of freedom?”

So began an e-mail I received from a friend of mine, Pastor Michael Duncan, announcing the publication of his new book, “Shadow Remnant”. I not only read it, but was so inspired that I wrote a book review for his blog. On the birthday of the freedom of our nation, I would like to share that review with you.

Imagine a future where we have survived another world war, but in the process, we’ve lost our principles of freedom and individual rights replaced by a single head of state and government that ruled every aspect of your life: what you believe, what you can and cannot do, what you are allowed to read and learn. Religious freedom has been banned and replaced by a secular government who now takes care of you. Any rebellion against this ideology is immediately squashed with re-training and indoctrination programs. Nobody is allowed to rebel. All communication sources are carefully controlled to give only the information the government wants us to have.

“Shadow Remnant” is the story of a young man hunted by government police because he is a rebel and therefore considered a threat to the state. Placed in a re-training and indoctrination school, he escapes, is shot and presumed dead. But a member of the Shadow Remnant, living in the fringes of our forests rescues him and nurses him back to health.

During those days of recuperation he learns from his rescuer about God and love and grace and what his country was like a hundred years before. During his escape eluding the police, the boy remembers seeing this old dusty book in an abandoned building and realizes that it was a bible. He goes back to retrieve it, is captured and sent to a prison island for insurgents left to forge any way they can to survive.

It is here he meets his father who he long ago thought was dead. His dad was once a member of the new government. When he discovered some old documents that were copies of our constitution, he knew he could no longer live the lies imposed on the people by this new government. He became part of a shadow remnant of people who want to preserve what was. He was hunted down and condemned for life on this island. His wife was killed and his son sent to state schools.

This is a fast paced book that grabs and holds your attention from page one when we are introduced to Peter, the young man who escapes, is nursed back to health and then re-captured. We are introduced to the struggles on the condemned island and individuals who still dream of escape and the return of the America of long ago. Peter escapes again; this time to find other members of the shadow remnant. His mission is to share with others what our nation lost – liberty, democracy and freedom.

The story weaves through many perilous journeys. But God is with him and in spite of enormous dangers, he is able to reconnect with other members who guide him on his mission to broadcast to the nation what the founding fathers set up for us in the constitution.

Unbelievable? Perhaps. But when you read the history of so many nations that have fallen under the spell of having government take care of them, it isn’t that unrealistic. When you watch the news of people who are oppressed under dictatorship or socialistic rule, and compare with the freedoms we have, it is not only plausible but possible.

We give our freedoms away, little by little, thinking it is so nice to have so many entitlements, until we wake up and realize that along with the entitlements we have given up our freedoms.

Pick up a copy of Shadow Remnant today and reflect on what it might mean if we no longer have the freedoms we do.