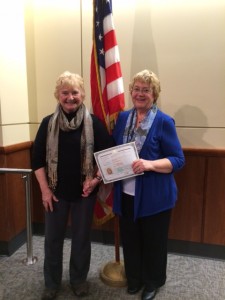 My sister – not by blood, but by a bond forged over the years.

Sometimes we are fortunate in that God gives two people a heritage that goes beyond blood, and we can truly call ourselves sisters.

Through thick and thin – good times and bad – I know I can depend on her to be there – for support – for physical assistance – someone who never thought twice to fly all the way from England to be with me when my husband was dying.

We were a foursome – with husbands who were just as good friends as we were. Coming home for summer breaks, they would walk in the door and we continued our conversation as though it were yesterday instead of two years.

Our lives though lived apart most of the time, was entwined by common threads that took us beyond the everyday and mundane to something special and extraordinary.

So, I was humbled and honored to be with her and her husband when she became an American citizen. As a Canadian married to an American, she traveled the world with him on military orders, to bases throughout Europe as he taught at DODS schools, and she taught tap dancing and helped with school plays and entertained men and women of the military in their home.

They were proud to be Americans and now she was making it official. She took the oath of allegiance, went up on that stage to receive her certificate of citizenship with other people from countries around the world, and cried when they showed a video of scenes of America while “I’m Proud to be an American” was sung.

There were tears because she had felt like an American for many years. She was there with the military men and women who served their country so proudly stationed in so many countries across the world. She wasn’t renouncing her other citizenship and birthright – she was just adding to it.

God bless America. And God bless you my dearest sister. We are proud of you and all you have done. You have always been an American to us. And American or not, you will always be my sister.

And may God guide each person who comes to this country and swears allegiance to her lands to be loyal and true to her as we continue to forge a land of greatness under God.

Congratulations sister. And thank you for giving me the honor and privilege to be there with you in this moment in your life.