Years ago, I was asked to give a speech to a group of teachers in the U.K. In that speech, I shared some of the stories my father-in-law used to tell my kids about when he was a kid.

Their much-loved Grandpa Bert was an easy-going guy, with seemingly not a care in the world, who drove my mother-in-law crazy. Here is one of his stories.

Bert attended a small, rural school. He was not a student of academia – in fact, he hated sitting in the classroom. During recess while other kids were busy jumping rope or throwing ball, he was busy exploring the tall grass around this little country school, looking for wonderful things such as worms, caterpillars, bugs, frogs, etc.

One nice warm spring day, he found a cute little baby garter snake. Wow! While he was busy enjoying his new discovery, the school bell rang, and all the kids ran inside. The teacher, knowing Bert would be dawdling, was at the school door and yelled sharply. “Bert!”

He did not want to let the snake go! He also knew that if he didn’t move fast, he was going to be in big trouble!

So he did what every red-blooded young boy would do – he stuffed the snake into the pocket of his jeans and ran into the school.

At first the little snake was content just to lie in this nice warm cozy “nest.” But pretty soon, as little snakes are apt to do, it got restless and began squirming and wriggling.

And Bert began to squirm as he tried to keep the snake from slithering out of his pocket. Finally, he did the only thing he could think of to do – he reached inside and took the snake out and held it tightly in his hand.

The curiosity antennas of the astute kids around him went on full alert. “What you got, Bert?” and “Let me see,” they whispered expectantly.

Bert carefully and discreetly gave them a peek when the teacher’s back was turned or when she was looking down at the papers on her desk. But his luck soon ran out. Just as he was giving a kid across the aisle a peek, the teacher looked up.

“Bert, what are you doing?” she asked as she got up and started down the aisle toward him.

He tried to put the snake back in his pocket, but the darn thing just wouldn’t cooperate.

The snake was just as determined to get away. As the teacher approached, she demanded in her loudest stern voice: “Bert! You give me what you have in your hand right now!”

Oh no, I’m dead meat, thought Bert. What am I going to do? 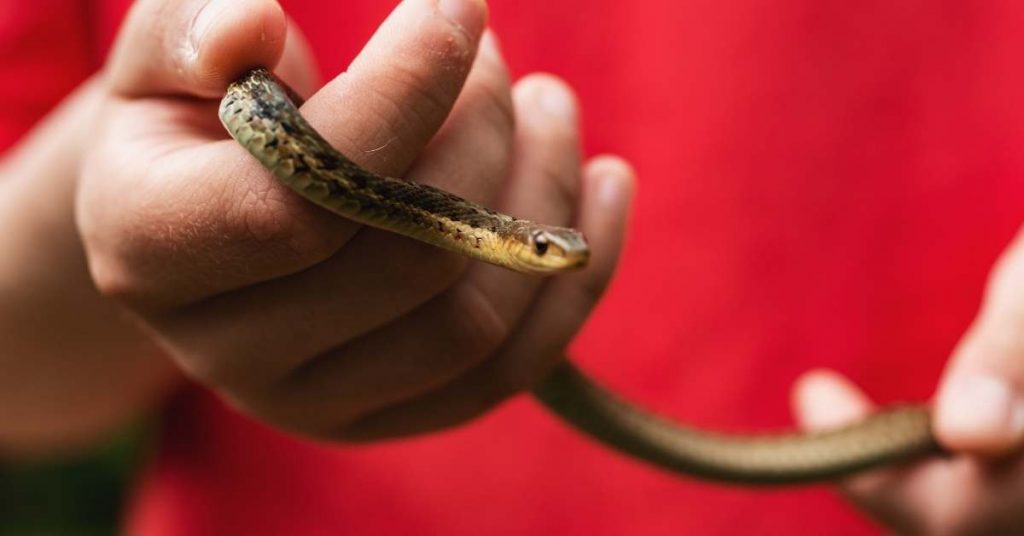 He did the only thing any rational young man would do. “No,” he said meekly. Upon which she adamantly demanded, “You give me what you have in your hand.”

Again, he said, “No”, upon which she said, “If you don’t put that in my hand right now, I will march you to the principal’s office.”

Now he was really worried. More than experiencing the wrath of his teacher, he was even more afraid of going to the principal’s office. Bad things happened there. Sometimes kids were never seen again – at least for that day!

So, he did what he was told, opened his hand and placed the squirming snake in his teacher’s hand. Upon which she screamed and fainted.

And yes, he did end up in the principal’s office – and yes, he disappeared from school for a whole week because he was suspended.

And here is the rest of the story. The day he returned to school, he was late and came screeching around the corner of the schoolhouse on his bike and smack – ran right into his teacher, knocking her flat!

We all laughed as the teachers I was talking to could identify with the antics of their students. And I’m sure they remembered times when they were the “Berts” in their own younger lives.

As we visualize this story, we have an opportunity to ask ourselves, can we see humor in those difficult and challenging times?

As a parent, can we bring humor into our family times together by being able to laugh at ourselves and see the humor in less than humorous moments?

It is not being insensitive or laughing at someone’s misfortunes. It is seeing within our life those humorous moments and knowing that we can laugh as well as cry.